Sunday, October 1, 5:00 pm
Building A Nation With Music–Opera & Italian Nationhood from the Risorgimento to the First World War

Professor Jonathan Hiller of Adelphi University will explain opera’s crucial role in Italian society from the time of the country’s move to unification in the mid-19th century to the First World War. Showing examples from many famous works (such as Nabucco, La Bohème, and Cavalleria Rusticana) along with some lesser-known works such as Cristoforo Colombo and I Medici, this presentation will show the intimate links between Italy’s eventful history, its drive towards building a national consciousness, and these seminal works of melodrama.

“Let’s go to that village” is a 2014 Italian comedy  written, directed and starred by the comedy duo Ficarra and Picone.
Valentino and Salvo – old friends, have lost their jobs – they decide to change their lives and move from the city of Palermo to the small Sicilian town of Monteforte, birthplace of Valentino and Salvo’s wife, hoping to limit expenses. The impact with the reality of the town is complicated and the small town seems to be inhabited only by the elderly. Salvo and Valentino, always looking for a solution to make ends meet, find a way to exploit it in their favor, turning the house into a sort of makeshift retirement home. The pact is clear: “You give us the pension and we’ll take care of you.” But no pension is forever …
Rating: NR; Running time about 90 minutes; Directed by Ficarra & Picone; In Italian with English Subtitles; Released in Italy in 2014
Trailer: https://www.youtube.com/watch?v=qJSRRQXwIgw&ab_channel=ficarraepiconevideo

Known as “the pope of physics” to his peers, Enrico Fermi-arguably Italy’s greatest scientist since Galileo and a founder of modern physics-is the subject of a new book, describing his early years in Italy and subsequent immigration to the United States, where he played a pivotal role in the development of the atomic bomb. Authors Gino Segrè, a professor at the University of Pennsylvania and his wife Bettina Hoerlin, a health policy expert, will discuss their book and its relevance to issues of today, including nuclear threats and the tensions between science
and politics.

Serena is an extraordinary talented architect. After a series of professional successes abroad, Serena decided to return to work in Italy because she loves her country. In the adventurous search for a job she faces a crazy choice, became what everyone expects her to be: a man … or so it seems. In the meantime, he meets Francesco. Beautiful and charming. The ideal companion. If it was for the fact, that he does not like women … Or so it seems. Between Serena and Francesco is born an intense relationship and they become the perfect couple … Ready to get ahead they will have to share secrets and deception because at times, to be really oneself, it is better to pretend to be someone else!

From polenta with mushrooms and cheese, to polenta with sausages, there is no end to the variety of dishes one can make with this humble cornmeal dish as the base. Join us for our always popular polenta festa, where members of the community bring a favorite polenta dish to share. Please bring your dish piping hot, since oven space is limited.

Princeton author Beth Brombert will speak about Elena Ferrante’s widely translated popular books, and how the original works, written in Italian, offer subtleties of language not found in the English translation.  A Tour of Elena Ferrante’s Naples: Danielle Oteri, art historian, writer and founder of Feast On History will walk you through many of Naples’ most famous sites and highlight the lesser known parts of the city.

The Tucci are a poor family in a small village in Lazio: mother, father, a conceited daughter and a genius son. They also live with their brother-in-law, a botanical engineer but a lazy bum, and a grandmother who is addicted to TV. One day, something completely unexpected happens: the Tucci win one hundred million euro. They decide to keep the winnings a secret, but as it often happens in these cases, a slip of the tongue from the head of the family and now there is only solution: run from the village. Destination: Milan! Once they arriveÂ  and start their new life as millionaires, the Tucci quickly realize that today’s wealthy are no longer like those of the past: they keep aÂ  low profile, they eat little or nothing, they are ecologists, they are involved in charities, they keep fit and get around strictly by bicycle. Being rich today has become a big pain in the neck. This discovery is very different from what the Tucci were expecting.
Rating: NR; Running time about 93 minutes; In Italian with English Subtitles; Released in Italy in 2016
Trailer: https://www.youtube.com/watch?v=_S0zJChyl1s&ab_channel=WarnerBros.Italia

Sunday, February 11, 5:00 pm (The second Sunday of the month instead of the first. )
What is it about Parma?

Film-maker August Ventura will share some extraordinary findings that have surfaced during research for his film project on Parma’s unique brand of Verdi-mania, including abundant rehearsal and performance footage, some of which have not been seen in over a century. He will provide an intriguing backstory of their rediscovery as well as a fascinating glimpse into the uniquely working-class milieu of Parma’s opera-mad populace.

This elegantly made film is the perfect vehicle for the vibrant talents of Valeria Bruni Tedeschi and Micaela Ramazzotti, playing patients in a mental institution who in true Thelma & Louise style decide to make a bid for freedom. Their escape is not pre-planned, but rather a spontaneous decision that sees them head off on a warm-hearted series of adventures very much based around a need for freedom and the women’s need to deal with unresolved issues in their lives. Both actresses deliver delightful and vibrant performances, with Paolo Virzi’s film strikingly human and thoughtful and made with real compassion and warmth.
Rating: NR; Running time about 111 minutes; Directed by  Paolo Virzi; In Italian with English Subtitles; Released in Italy in 2016
Trailer: https://www.youtube.com/watch?v=ikcsQBz8q4g&ab_channel=01Distribution

Novelist and translator Jenny McPhee will discuss her love of things Italian and read from her most recent work, a translation of Natalia Ginzburg’s most celebrated novel, Lessico Famigliare (Family Lexicon). The program will feature an Italian/English format with McPhee reading in English and Princeton University Professor Pietro Frassica reading in Italian. McPhee, who grew up in the Princeton area, has also translated works by Primo Levi, Giacomo Leopardi, and Paolo Maurensig, among others.

TICKETS LIMITED TO TWO PER PERSON. Tickets are free but required and can be picked up in person starting February 15 at Labyrinth Books. NO RESERVATIONS WILL BE ACCEPTED!
—————————————————————————————
Sharp, succinct storytelling and breathtaking prose combine in a new novel, Trick, by Domenico Starnone, author of the New York Times editor’s pick, Ties. His work is beautifully rendered in English by Jhumpa Lahiri, who will read from Trick and discuss both the novel and the art of translation with her colleague and fellow-translator, Alessandro Giammei.

Imagine a duel between an elderly man and a mere boy. The same blood runs through their veins. One, Daniele Mallarico, is a successful illustrator whose reputation is slowly fading. The other, Mario, is his four-year-old grandson. The older combatant has lived for years in solitude, focusing obsessively on his work. The younger one has been left by his querulous parents with his grandfather for a 72-hour stay. Shut inside an apartment in Naples that is filled with the ghosts of Mallarico’s own childhood, grandfather and grandson match wits, while outside lurks Naples, a wily, violent, and passionate city whose influence is not easily shaken. Trick is a gripping, wry, brilliantly devised drama, “an extremely playful literary composition,” as Jhumpa Lahiri describes it in her introduction, about aging, family, art, and reconciling with one’s past.

Domenico Starnone is an Italian writer, screenwriter and journalist. He was born in Naples and lives in Rome. He is the author of thirteen works of fiction, including First Execution and Via Gemito, winner of Italy’s most prestigious literary prize, the Strega. Jhumpa Lahiri is the Pulitzer prize winning author of The Interpreter of Maladies, The Namesake, and Unaccustomed Earth, among other books. Her works originally written in Italian are In Other Words and The Clothing of Books. She is also an accomplished translator from the Italian, most recently of Starnone’s previous book, Ties, and teaches Creative Writing at the Lewis Center for the Arts. Alessandro Giammei is Lecturer in the Humanities Council and French & Italianas well as Fellow in the Society of Fellows at Princeton University.

The Princeton Migrations Series is a community-wide investigation of the theme of migration taking place throughout the region from February through May. Spearheaded by Princeton University Art Museum, the project includes exhibitions, readings, lectures, film screens and performances by more than 20 community partners and a host of campus organizations and departments. More info at princetonmigrations.org

Sunday, April 8, 5:00 pm (The second Sunday of the month instead of the first)
Jazz Italian Style–From Its Origins in New Orleans to Fascist Italy and Sinatra:

Professor Anna Celenza of Georgetown University presents a multi-media overview of her latest book, which presents a forgotten chapter in jazz history- the development of jazz in Mussolini’s Italy-and demonstrates how this new musical style eventually influenced quintessentially “American” performers like the Andrews Sisters and Frank Sinatra.

The music of violin virtuoso Arcangelo Corelli continues to be enjoyed by audiences around the world nearly three hundred years following his death. John Burkhalter, artistic director of “The Practitioners of Musick,” will present an illustrated talk on Corelli’s musical world, supplemented with a performance of his chamber music featuring various instruments including the harpsichord and “English” flute.

Highlights from Past Programs: 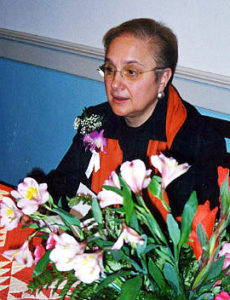 May – A Pirandellian evening with students from Princeton University

April – Evening of poetry from Loretta Casalaina and Maria Fama

May – Wine tasting from Tony Prospero of Prospero Winery in Pleasantville, N.Y. 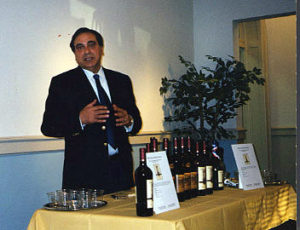 Nov. – Lecture on paper making in Fabriano by Raffaele Roncalli 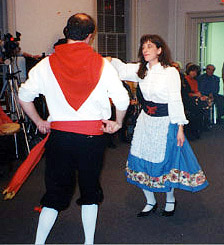 Jan. – Sister Margherita Marchione introduces her book “Yours is a Precious Witness”

Feb. – Venice during Carnevale lecture and slides by Carla Olsen

Jan. – Lecture by Professor Pietro Frassica on letters to Pirandello by Marta Abba

Nov. – Lecture on Italians in Princeton by Robert Immordino and Ciro Poppiti

Feb. – Operatic performance by singers of the Boheme Opera Company

March – An armchair tour of the Dolomite region 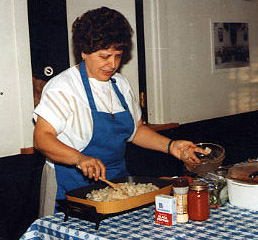 Jan. – Lecture on the Etruscans by Professor Maria Teresa Moevs

May – Italian folkdancing with the Montclair Folk Group

Nov. – Lecture on operas of Mascagni by Alan Mallach

May – Concert by cellist Gino Treves and string quartet

PDF Versions of past programs: